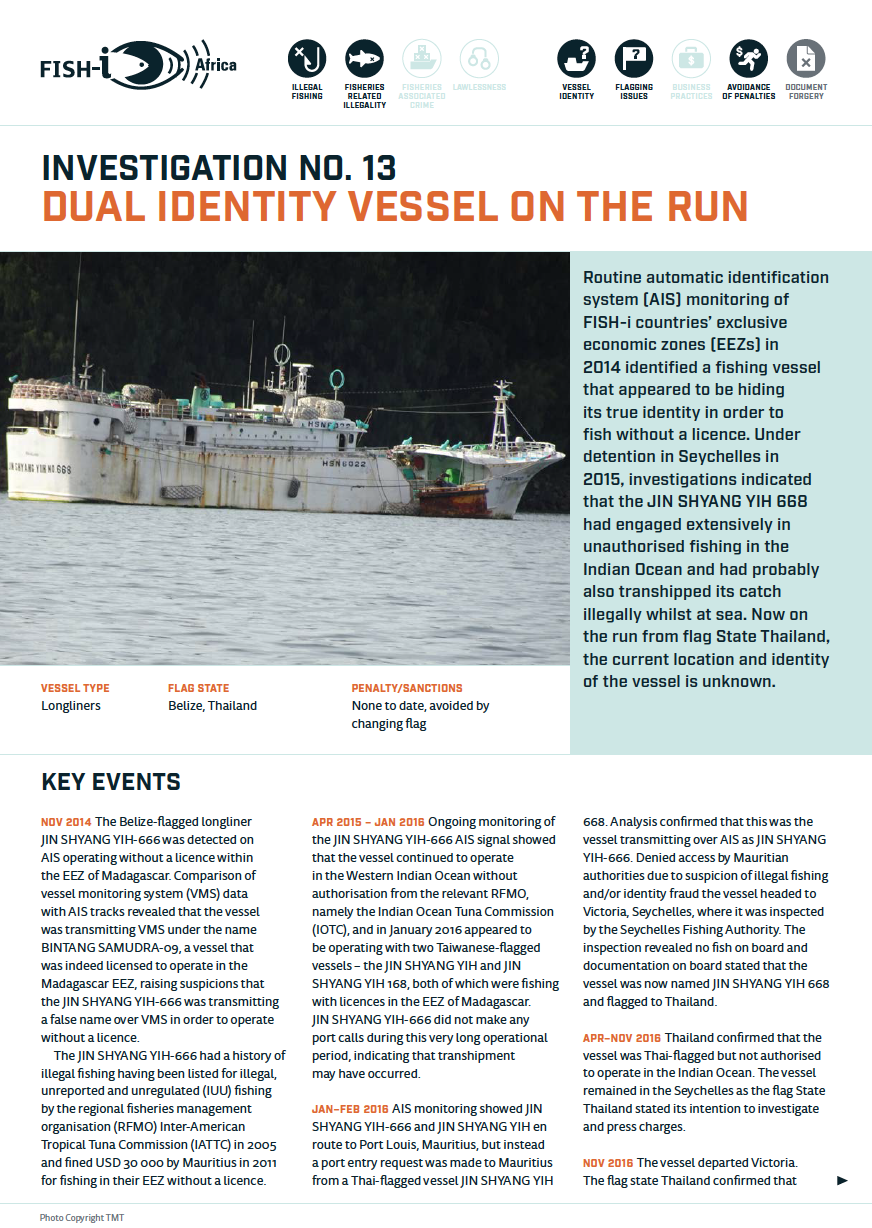 INVESTIGATION No. 13 Dual identity vessel on the run

Routine automatic identification system (AIS) monitoring of FISH-i countries’ exclusive economic zones (EEZs) in 2014 identified a fishing vessel that appeared to be hiding its true identity in order to fish without a licence. Under detention in Seychelles in 2015, investigations indicated that the JIN SHYANG YIH 668 had engaged extensively in unauthorised fishing in the Indian Ocean and had probably also transhipped its catch illegally whilst at sea. Now on the run from flag State Thailand, the current location and identity of the vessel is unknown.

November 2014: The Belize-flagged longliner JIN SHYANG YIH-666 was detected on AIS operating without a licence within the EEZ of Madagascar. Comparison of vessel monitoring system (VMS) data with AIS tracks revealed that the vessel was transmitting VMS under the name BINTANG SAMUDRA-09, a vessel that was indeed licensed to operate in the Madagascar EEZ, raising suspicions that the JIN SHYANG YIH-666 was transmitting a false name over VMS in order to operate without a licence.

The JIN SHYANG YIH-666 had a history of illegal fishing having been listed for illegal, unreported and unregulated (IUU) fishing by the regional fisheries management organisation (RFMO) Inter-American Tropical Tuna Commission (IATTC) in 2005 and fined USD 30 000 by Mauritius in 2011 for fishing in their EEZ without a licence.

April – November 2016: Thailand confirmed that the vessel was Thai-flagged but not authorized to operate in the Indian Ocean. The vessel remained in the Seychelles as the flag State Thailand stated its intention to investigate and press charges.

November 2016: The vessel departed Victoria. The flag state Thailand confirmed that the vessel was heading east possibly to Sri Lanka or Thailand. A Thai Navy vessel was tasked with intercepting and arresting the vessel. The vessel owner appeared to receive information of this, and requested to return to Victoria, which was denied under the Port State Measures Agreement. The vessel evaded the Thai Navy patrol, and its current location is unknown.

December 2016: Evidence emerged that the vessel subsequently registered with Belize, investigations into the status of both the Belize and Thailand flags and the ownership information continue.

Flagging issues: The changes of flag State from Belize to Thailand and possibly back to Belize were made to avoid sanctions and to cover up an IUU fishing history.

Avoidance of penalties: Changing flags to Belize, changing sailing course to avoid interception by the Thai navy and not transmitting any satellite signals, all appear to be attempts to avoid sanctions.

Document forgery (suspected): The documents presented to the Seychelles Fishing Authority for the JIN SHYANG YIH 668 are suspected to be forged or fraudulently used. 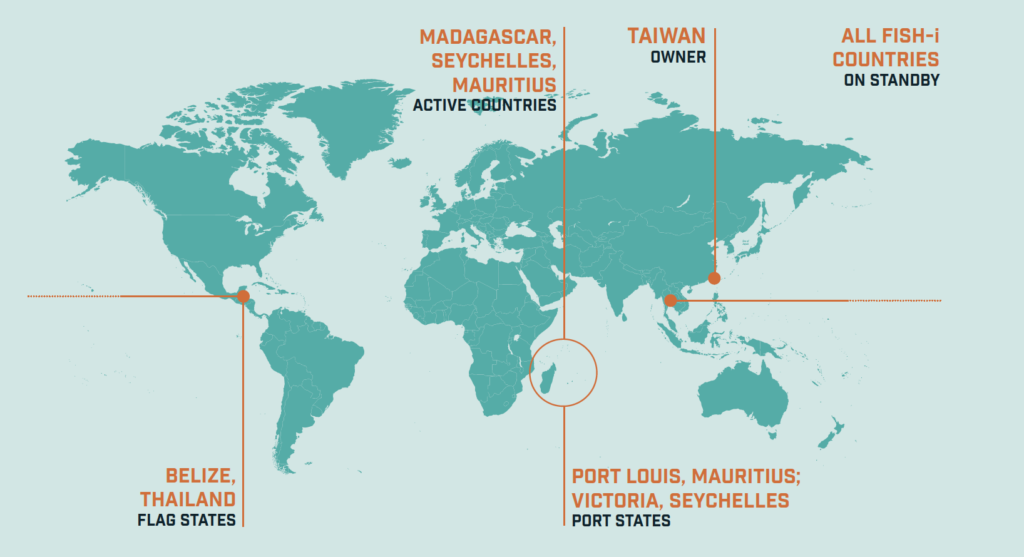