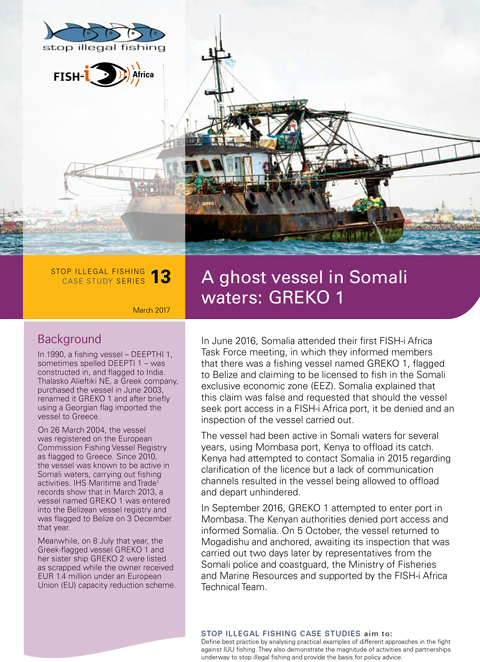 In 1990, a fishing vessel – DEEPTHI 1, sometimes spelled DEEPTI 1 – was constructed in, and flagged to India. Thalasko Alieftiki NE, a Greek company, purchased the vessel in June 2003, renamed it GREKO 1 and after briefly using a Georgian flag imported the vessel to Greece. On 26 March 2004, the vessel was registered on the European Commission Fishing Vessel Registry as flagged to Greece. Since 2010, the vessel was known to be active in Somali waters, carrying out fishing activities. IHS Maritime and Trade1 records show that in March 2013, a vessel named GREKO 1 was entered into the Belizean vessel registry and was flagged to Belize on 3 December that year. Meanwhile, on 8 July that year, the Greek-flagged vessel GREKO 1 and her sister ship GREKO 2 were listed as scrapped while the owner received EUR 1.4 million under an European Union (EU) capacity reduction scheme.

In June 2016, Somalia attended their first FISH-i Africa Task Force meeting, in which they informed members that there was a fishing vessel named GREKO 1, flagged to Belize and claiming to be licensed to fish in the Somali exclusive economic zone (EEZ). Somalia explained that this claim was false and requested that should the vessel seek port access in a FISH-i Africa port, it be denied and an inspection of the vessel carried out.

The vessel had been active in Somali waters for several years, using Mombasa port, Kenya to offload its catch. Kenya had attempted to contact Somalia in 2015 regarding clarification of the licence but a lack of communication channels resulted in the vessel being allowed to offload and depart unhindered.

In September 2016, GREKO 1 attempted to enter port in Mombasa. The Kenyan authorities denied port access and informed Somalia. On 5 October, the vessel returned to Mogadishu and anchored, awaiting its inspection that was carried out two days later by representatives from the Somali police and coastguard, the Ministry of Fisheries and Marine Resources and supported by the FISH-i Africa Technical Team.

The following violations were identified:

On the morning of 13 October 2016, GREKO 1 fled Mogadishu. However, five days later, the captain reported a sick crew member, enacting ’force majeure’ to gain port access in Mombasa. Kenya contacted Somali authorities who contacted Belize authorities once more. The Belize authorities issued a ‘prohibition-to-sail’ notice and suspended the high seas fishing licence, making it illegal for the vessel to  leave port without prior authorisation from Belize to do so. A second inspection was carried out and the registered owner was contacted and presented with the legal charges.

The Somali authorities settled outside of court with the registered owner, the Panamanian Mare Fishing Co., and the USD 65 000 fine agreed was paid. The Director and President of the Panamanian company, Stavros Mandalios (a Greek national and resident), with whom the negotiation was conducted, was the same beneficial owner who in 2013 received EUR 1.4 million for the scrapping of the Greek-flagged GREKO 1 and a sister ship, the GREKO 2, in Greece.

The Greek company Thalasco Fishing Shipping Co. is the holding company of Mare Fishing Co. According to the United Nations (UN) Ocean Atlas, Mr Mandalios is also the General Manager of Thalasco Fishing Shipping Co. The Belize registration documentation for GREKO 1 listed the previous name of the vessel as DEEQA 1 and the previous flag as Somali. However, in January 2017, photographs of Belize-flagged GREKO 1 taken during its inspection in Mogadishu revealed the name DEEPTHI 1 embossed on the hull of the vessel. IHS Maritime records have only one vessel linked to that name (DEEPTI 1), which is the Greek-flagged GREKO 1, allegedly scrapped in 2013. This indicated that the Greek vessel might not have been scrapped. This is also true for the Belize-flagged GREKO 2, which was anchored alongside GREKO 1 in Mombasa and has the name DEEPTHI 2 embossed on its hull. A name that only the Greekflagged GREKO 2 is associated with in IHS Maritime’s records.

The main drivers in this case were threefold: the communication and will by Somalia regarding the fraudulent licence and intent to pursue the vessel, the cooperation and diligence of the Kenyan authorities, and the joint effort in inspecting the vessel and uncovering its history.

To facilitate further cooperation, future efforts should include:

Stop Illegal Fishing Case Studies aim to define best practice by analysing practical examples of different approaches in the fight against IUU fishing. They also demonstrate the magnitude of activities and partnerships underway to stop illegal fishing and provide the basis for policy advice.