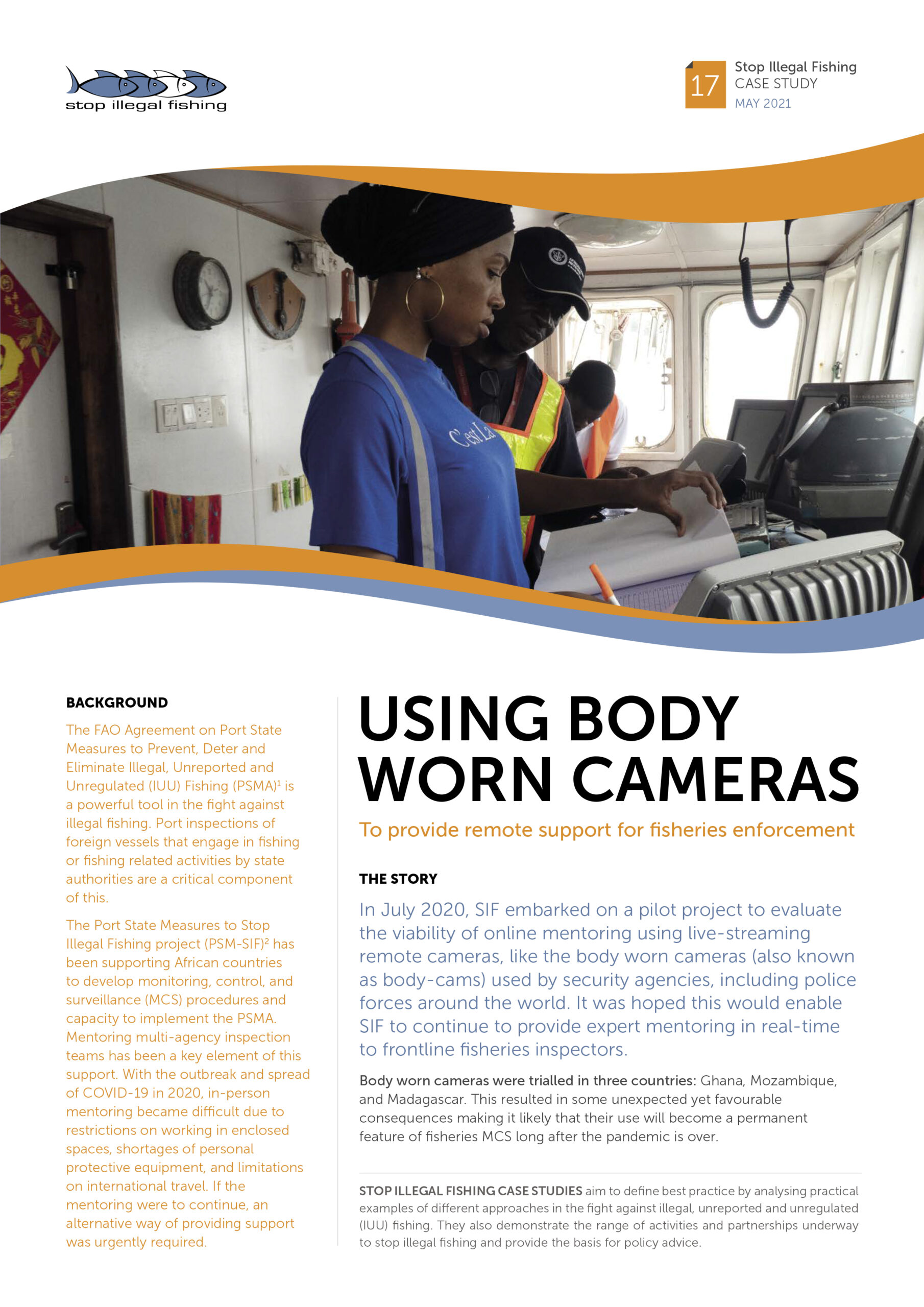 The FAO Agreement on Port State Measures to Prevent, Deter and Eliminate Illegal, Unreported and Unregulated (IUU) Fishing (PSMA)1 is a powerful tool in the fight against illegal fishing. Port inspections of foreign vessels that engage in fishing or fishing related activities by state authorities are a critical component of this. The Port State Measures to Stop Illegal Fishing project (PSM-SIF)2 has been supporting African countries to develop monitoring, control, and surveillance (MCS) procedures and capacity to implement the PSMA. Mentoring multi-agency inspection teams has been a key element of this support. With the outbreak and spread of COVID-19 in 2020, in-person mentoring became difficult due to restrictions on working in enclosed spaces, shortages of personal protective equipment, and limitations on international travel. If the mentoring were to continue, an alternative way of providing support was urgently required.

In July 2020, Stop Illegal Fishing (SIF) embarked on a pilot project to evaluate the viability of online mentoring using live-streaming remote cameras, like the body worn cameras (also known as bodycams) used by security agencies, including police forces around the world. It was hoped this would enable SIF to continue to provide expert mentoring in real-time to frontline fisheries inspectors.

Body worn cameras were trialled in three countries: Ghana, Mozambique, and Madagascar. This resulted in some unexpected yet favourable consequences making it likely that their use will become a permanent feature of fisheries MCS long after the pandemic is over.

The camera selected was the Onethingcam C310 body worn camera. This camera has Wi-Fi and 3G/4G capabilities. It streams audio and video live and enables communication between the individual wearing it and the remote receiver of the livestream, thus enabling mentoring during inspections. It also has recording capabilities, enabling videos to be uploaded to a secure cloud server for subsequent viewing.

Initially SIF ordered two cameras for viability testing. These arrived in South Africa in July 2020 and were successfully tested. It was established that with Wi-Fi the camera battery lasted for eight hours. If Wi-Fi was unavailable the camera switched to 3G/4G, reducing the battery time to around four hours, which was generally still enough time to undertake an inspection. 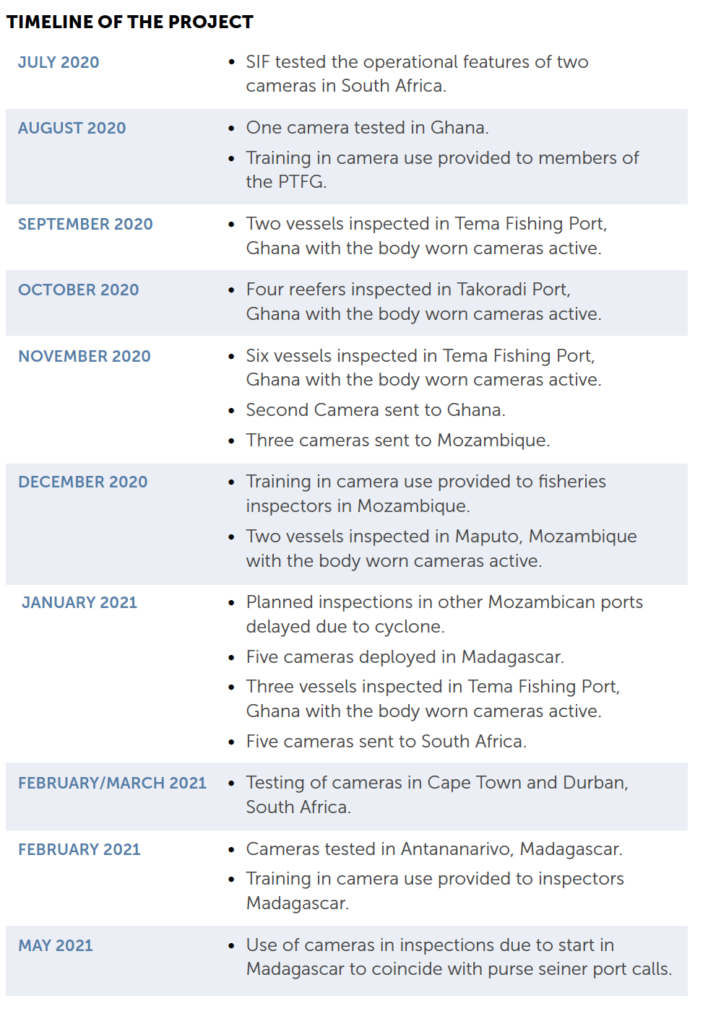 One of the cameras was sent to the Ports Task Force Ghana (PTFG), an interagency group established to implement effective port State measures in Ghana. The system was tested by SIF in-country experts at Tema Port relaying the livestream to remotely located experts. Although the 3G/4G signal was weak and made the livestream lag, it was still feasible for real time mentoring support to be provided to the PTFG.

The first two vessels that were inspected using livestream body worn cameras were a fishing trawler and a reefer, in Tema in September 2020. This exercise showed that the concept worked in the field. The project was then expanded to Takoradi Port, Ghana.

Following the successful pilot in Ghana, three cameras were supplied to the Ministry of Sea, Inland Waters and Fisheries in Mozambique and five cameras were sent to the Ministry of Marine Resources and Fisheries, Madagascar. This provided a camera in each of the PSMA designated ports of Antsiranana, Mahajanga, Tulear, Tamatave and Taolagnaro in Madagascar and Maputo, Nacala and Beira in Mozambique.

It was quickly recognised that apart from enabling expert remote mentoring of inspections, the body worn camera system also provides the opportunity for colleagues and senior officers to watch and assist with inspections.

This enabled supervisors to oversee inspections, even when based far from the port, offering an opportunity to provide expertise or additional information as needed, to evaluate performance and to give feedback. It was tested that the livestream could be sent to multiple receivers at the same time, enabling simultaneous support to the inspectors that were physically undertaking the inspection.

This use of technology has enabled mentoring of inspections to continue during the COVID-19 pandemic, and to expand as experts can engage in more than one port at once. This saves travel time and costs and so is expected to become a standard tool for support to fisheries MCS.

Many advantages of using body worn cameras have been identified, including that the quality of inspections improving due to remote oversight, opportunities for corruption, violence and confrontations being reduced, and recordings providing a valuable resource for training and case studies.

The pilot project to test the viability of using remote cameras has provided good evidence that this is an excellent tool to provide support and build capacity in partner countries. Other potential applications have been identified for exploration including a pilot with an at-sea observer  programme.

Mentoring and training of inspectors to improve inspection practice and standards was identified as a key requirement by countries implementing port State measures in Africa and is an integral requirement of the PSMA for developing States. COVID-19 threatened the continuation of this support in a hands-on manner, so innovative approaches needed to be developed.

Train personnel in the use of cameras

Introduce the use of body worn cameras more widely for use in ports and in other situations – e.g., for observers and during surveillance flights.

Ongoing use of cameras for inspections

Project experts will join at least one inspection via remote cameras per week in each partner country, if they are taking place. This will enable:

A potential use of the cameras is to use this to enhance wider interagency involvement in inspections. This can be tested and demonstrated during interagency meetings, and then it may be agreed to share live or recorded access with other agencies to improve not only port State measures for fisheries compliance but also port State controls for detection of non-compliance in maritime, labour or other sectors.

Sharing of the project experiences will include:

2 Stop Illegal Fishing is working closely with the FAO Global Capacity Development Programme for the PSMA to implement a capacity building project, called Port State Measures to Stop Illegal Fishing, financed by the GIZ and commissioned by the Federal Republic of Germany. For more information visit: www.stopillegalfishing.com/initiatives/implementing-port-state-measures.

The Fisheries Committee for the West Central Gulf of Guinea (FCWC) 14th Session...

12th Meeting of the SADC RTT in the Seychelles

A workshop on the resumed formulation of a national strategy and action plan...