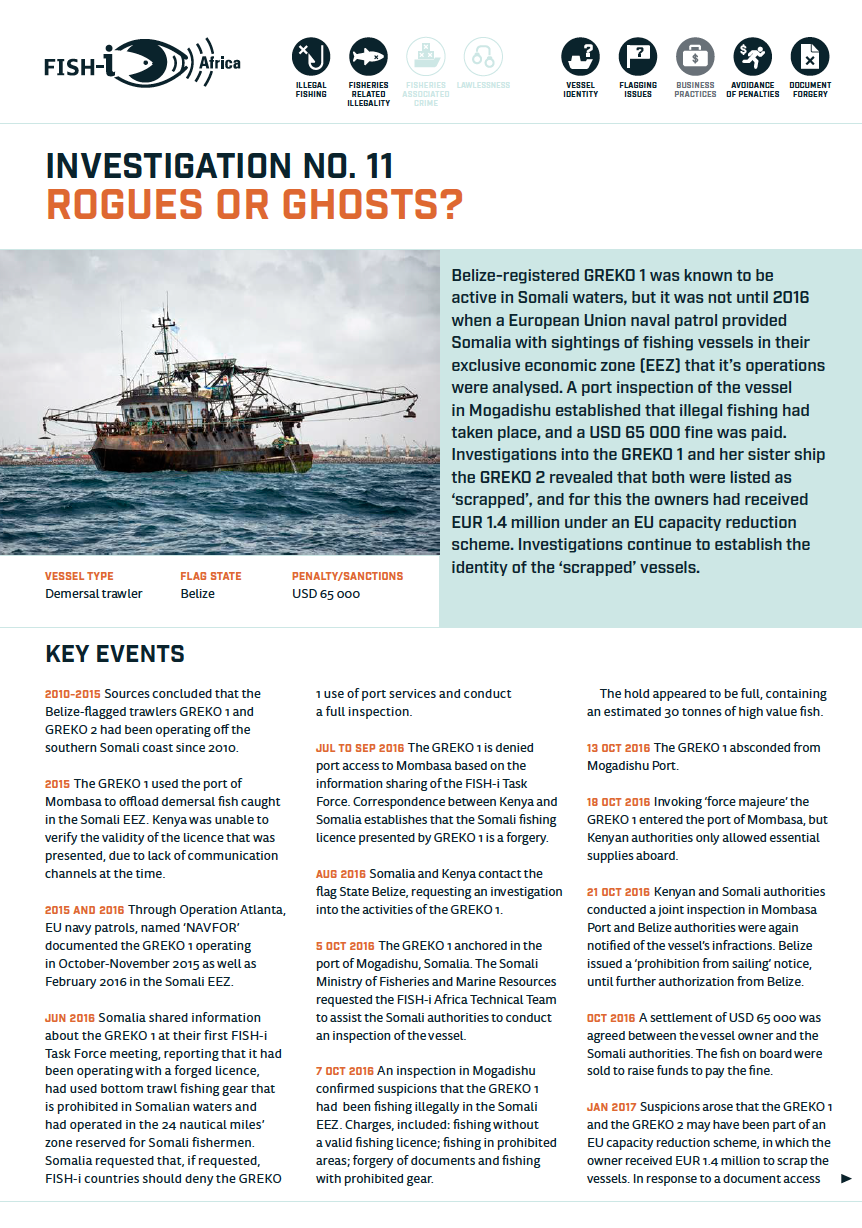 INVESTIGATION No. 11 Rogues of ghosts?

Belize-registered GREKO 1 was known to be active in Somali waters, but it was not until 2016 when a European Union naval patrol provided Somalia with sightings of fishing vessels in their exclusive economic zone (EEZ) that it’s operations were analysed. A port inspection of the vessel in Mogadishu established that illegal fishing had taken place, and a USD 65 000 fine was paid. Investigations into the GREKO 1 and her sister ship the GREKO 2 revealed that both were listed as ‘scrapped’, and for this the owners had received EUR 1.4 million under an EU capacity reduction scheme. Investigations continue to establish the identity of the ‘scrapped’ vessels.

2010-2015: Sources concluded that the Belize-flagged trawlers GREKO 1 and GREKO 2 had been operating off the southern Somali coast since 2010.

2015: The GREKO 1 used the port of Mombasa to offload demersal fish caught in the Somali EEZ. Kenya was unable to verify the validity of the licence that was presented, due to lack of communication channels at the time.

2015 and 2016: Through Operation Atlanta, EU navy patrols, named ‘NAVFOR’ documented the GREKO 1 operating in October-November 2015 as well as February 2016 in the Somali EEZ.

June 2016: Somalia shared information about the GREKO 1 at their first FISH-i Task Force meeting, reporting that it had been operating with a forged licence, had used bottom trawl fishing gear that is prohibited in Somali waters and had operated in the 24 nautical miles’ zone reserved for Somali fishermen. Somalia requested that, if requested, FISH-i countries should deny the GREKO 1 use of port services and conduct a full inspection.

July to September 2016: The GREKO 1 is denied port access to Mombasa based on the information sharing of the FISH-i Task Force. Correspondence between Kenya and Somalia establishes that the Somali fishing licence presented by GREKO 1 is a forgery.

August 2016: Somalia and Kenya contact the flag State Belize, requesting an investigation into the activities of the GREKO 1.

5 October 2016: The GREKO 1 anchored in the port of Mogadishu, Somalia. The Somali Ministry of Fisheries and Marine Resources requested the FISH-i Africa Technical Team to assist the Somali authorities to conduct an inspection of the vessel.

7 October 2016: An inspection in Mogadishu confirmed suspicions that the GREKO 1 had been fishing illegally in the Somali EEZ. Charges, included: fishing without a valid fishing licence; fishing in prohibited areas; forgery of documents and fishing with prohibited gear. The hold appeared to be full, containing an estimated 30 tonnes of high value fish.

18 October 2016: Invoking ‘force majeure’ the GREKO 1 entered the port of Mombasa, but Kenyan authorities only allowed essential supplies aboard.

21 October 2016: Kenyan and Somali authorities conducted a joint inspection in Mombasa Port and Belize authorities were again notified of the vessel’s infractions. Belize issued a ‘prohibition from sailing’ notice, until further authorization from Belize.

October 2016: A settlement of USD 65 000 was agreed between the vessel owner and the Somali authorities. The fish on board were sold to raise funds to pay the fine.

January 2017: Suspicions arose that the GREKO 1 and the GREKO 2 may have been part of an EU capacity reduction scheme, in which the owner received EUR 1.4 million to scrap the vessels. In response to a document access request by FISH-i, EU DG MARE confirmed that GREKO 1 (IMO 8615679) and GREKO 2 (IMO 8615681) were indeed scrapped in 2013 with the owner receiving financial compensation. The names and the physical characteristics associated with these IMO numbers match those for the vessels active in Somalia. Several identical vessels were built at the same time in the same Indian shipyard. A previous name, DEEPTHI that is visibly engraved on the hull of the vessel GREKO 1 anchored in Mombasa was the original name for IMO 8615679, as listed by the shipyard. This raises questions over the 2013 scrapping and if financial fraud took place. Investigations continue.

Vessel identity: The complex identity history of both the GREKO 1 and GREKO 2 made it difficult to confirm whether these names had been transferred (reused) between vessels, or whether changes had been made to vessel histories in a deliberate effort to hide a potential scrapping fraud. Inconsistent use of Greek and Roman letters in official documents made tracing the vessel history difficult.

Flagging issues: Change of flag from Greece to Somalia, and then to Belize during the months when the GREKO 1 and GREKO 2 were allegedly scrapped may have been designed to cover up the true history and identity of the vessels.

Avoidance of penalties: The GREKO 1 absconded from Somali authorities and only settled the fine after Kenyan authorities intervened.

Document forgery: A forged licence to fish in the Puntland zone of Somalia was provided to Kenyan authorities.

Business practices (suspected): If the vessel scrapping is found to have been fraudulent, some level of corruption is suspected in relation to the compensation payment. 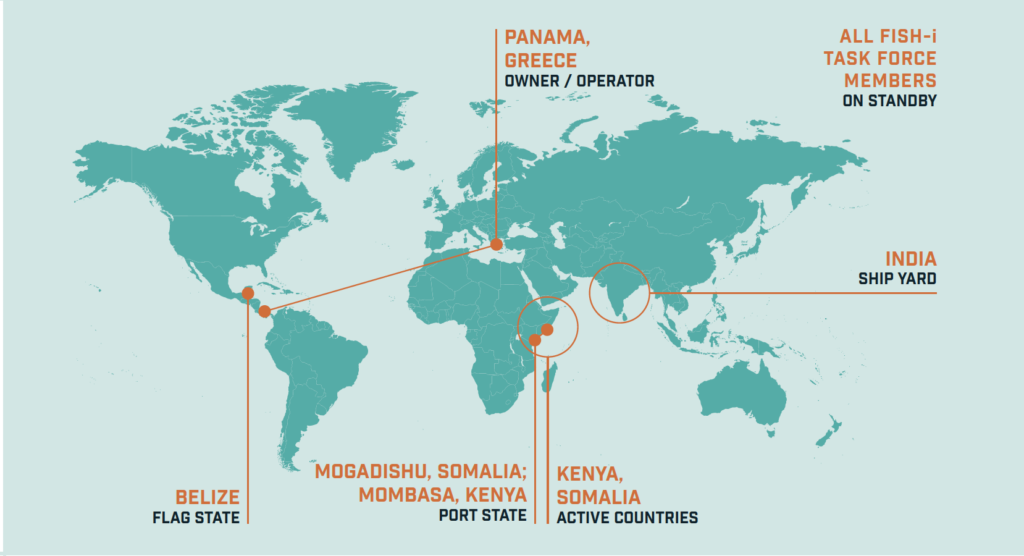