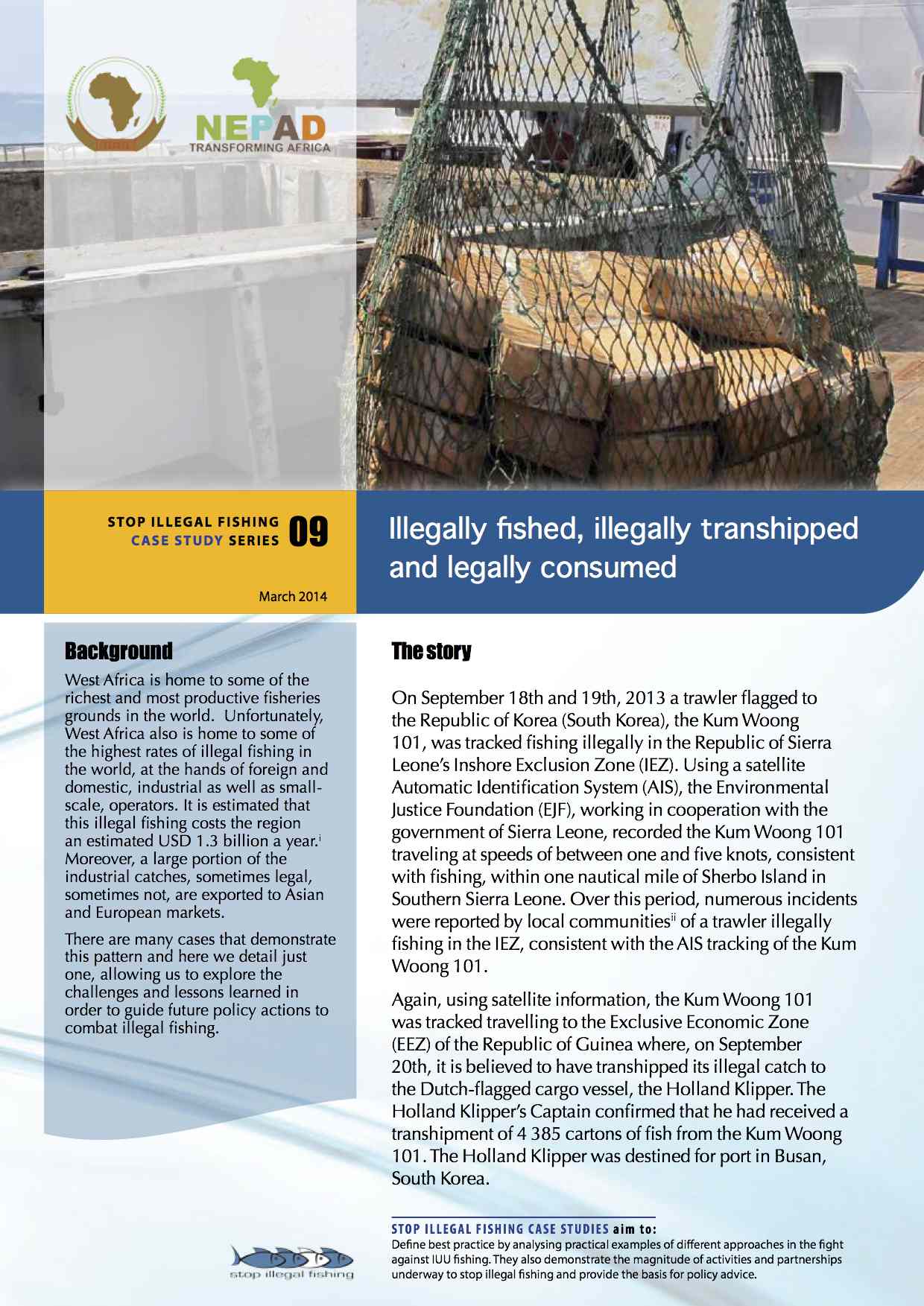 West Africa is home to some of the richest and most productive fisheries grounds in the world. Unfortunately, West Africa also is home to some of the highest rates of illegal fishing in the world, at the hands of foreign and domestic, industrial as well as smallscale, operators. It is estimated that this illegal fishing costs the region an estimated USD 1.3 billion a year. Moreover, a large portion of the industrial catches, sometimes legal, sometimes not, are exported to Asian and European markets. There are many cases that demonstrate this pattern and here we detail just one, allowing us to explore the challenges and lessons learned in order to guide future policy actions to combat illegal fishing.

On September 18th and 19th, 2013 a trawler flagged to the Republic of Korea (South Korea), the Kum Woong 101, was tracked fishing illegally in the Republic of Sierra Leone’s Inshore Exclusion Zone (IEZ). Using a satellite Automatic Identification System (AIS), the Environmental Justice Foundation (EJF),  working in cooperation with the government of Sierra Leone, recorded the Kum Woong 101 traveling at speeds of between one and five knots, consistent with fishing, within one nautical mile of Sherbo Island in Southern Sierra Leone. Over this period, numerous incidents were reported by local communitiesii of a trawler illegally fishing in the IEZ, consistent with the AIS tracking of the Kum Woong 101.

Additionally, the European Union (EU) Regulation on Illegal, Unreported and Unregulated (IUU) fishing, (EC) No 1005/2008, states that “fishing vessels flying the flag of a Member State shall not be authorized to tranship at sea from third country fishing vessels outside Community waters,” unless “registered as carrier vessels under the auspices of a regional fisheries management organisation (RFMO).”iv Since the Holland Klipper falls within the definition of  “fishing vessel” established by the Regulation, is flagged by a Member State, and transhipped from a South Korean-flagged vessel outside of Community waters, outside of the auspices of an RFMO, it is argued that the Holland Klipper also violated the EU Regulation against IUU fishing.

Due to increased efforts by African governments, supported by strengthened cooperation with non-government partners, surveillance of illegal fishing activities in African waters is improving.iv The cooperation between Sierra Leone and EJF led to the tracking and identification of the Kum Woong 101, thereby exposing the trail of illegal fish from sea eventually to market.

In order to ensure a fair conclusion to this case and to prevent similar incidents in the future, the following steps should be considered:

vi Recommendation by the 2010 Conference of African Ministers of Fisheries and Aquaculture (CAMFA) ‘that monitoring, control and surveillance (MCS) systems and regional cooperation should be strengthened and that urgent actions at national and regional levels are required to deter and eradicate IUU fishing’.

This case study was prepared and reviewed by a Stop Illegal Fishing Focus Group led by Shannon Cosentino-Roush with Sandy Davies, Per Erik Bergh and EJF. Photographs courtesy of NFDS.