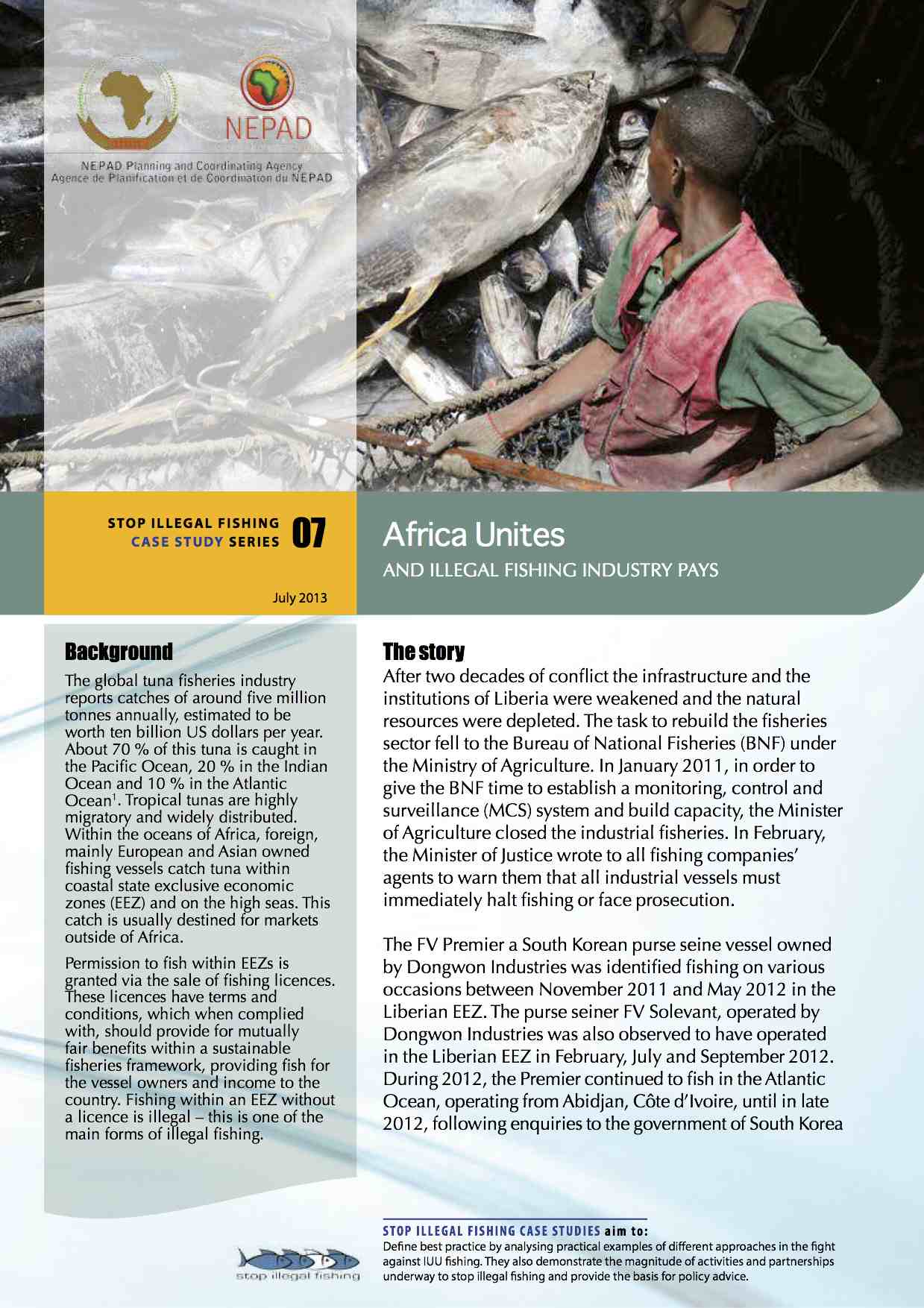 The global tuna fisheries industry reports catches of around five million tonnes annually, estimated to be worth ten billion US dollars per year. About 70% of this tuna is caught in the Pacific Ocean, 20% in the Indian Ocean and 10% in the Atlantic Ocean. Tropical tunas are highly migratory and widely distributed.

Within the oceans of Africa, foreign, mainly European and Asian owned fishing vessels catch tuna within coastal state exclusive economic zones (EEZ) and on the high seas. This catch is usually destined for markets outside of Africa. Permission to fish within EEZs is granted via the sale of fishing licences. These licences have terms and conditions, which when complied with, should provide for mutually fair benefits within a sustainable fisheries framework, providing fish for the vessel owners and income to the country. Fishing within an EEZ without a licence is illegal – this is one of the main forms of illegal fishing.

After two decades of conflict the infrastructure and the institutions of Liberia were weakened and the natural resources were depleted. The task to rebuild the fisheries sector fell to the Bureau of National Fisheries (BNF) under the Ministry of Agriculture. In January 2011, in order to give the BNF time to establish a monitoring, control and surveillance (MCS) system and build capacity, the Minister of Agriculture closed the industrial fisheries. In February, the Minister of Justice wrote to all fishing companies’ agents to warn them that all industrial vessels must immediately halt fishing or face prosecution.

The FV PREMIER a South Korean purse seine vessel owned by Dongwon Industries was identified fishing on various occasions between November 2011 and May 2012 in the Liberian EEZ. The purse seiner FV SOLEVANT, operated by Dongwon Industries was also observed to have operated in the Liberian EEZ in February, July and September 2012.

During 2012, the PREMIER continued to fish in the Atlantic Ocean, operating from Abidjan, Côte d’Ivoire, until in late 2012, following enquiries to the government of South Korea and media coverage of suspected illegal fishing on the Stop Illegal Fishing website, it relocated to the Indian Ocean, arguably in an attempt to escape justice. The Liberian Governments investigation into both the PREMIER’s and the SOLEVANT’s activities was concluded in February 2013 with charges made to both vessels for violations of the Liberia Fisheries Regulations including fishing without a licence.

At this time several coastal states of the Indian Ocean were launching the FISH-i Africa Task Force an initiative of Stop Illegal Fishing, supported by the Pew Charitable Trusts, with the purpose of enabling targeted enforcement actions against illegal fishing operators through coordinated analysis and use of intelligence and information. The Task Force was aware of the investigations into the PREMIER and were anticipating its arrival in December 2012 in Port Louis, Mauritius. In response to a request by the Liberian government the Mauritian Ministry of Fisheries inspected the vessel and provided copies of the fishing catch log and a forged Liberian fishing licence to Liberia.

In early 2013, while the investigation remained open the FISH-i Africa countries showed support to Liberia and action against IUU fishing:

PREMIER was by then a notorious IUU fishing vessel. Liberia’s action followed by the allegiance of the FISH-i Africa countries and Mauritius led to over 50 international press stories, numerous blogs, tweets, Facebook comments and activists painting the word “illegal” on the hull of the vessel. Africa and the world made it clear that until the fine was paid – the Premier was not welcome, nor was its fish wanted.

On the 22 April 2013, the owners of the vessel, South Korea’s Dongwon Industries paid the Liberian government two million US dollars in settlement of the charges against the FV PREMIER and the FV SOLEVANT. The Mauritian government did not allow the Premier to offload in Port Louis as it did not want potentially illegal fish to enter its market: she eventually offloaded in May in Colombo, Sri Lanka before sailing back home to South Korea.

The main driver for action was the need to stop the damaging effects of illegal fishing on African societies and resources and to demonstrate to fishing vessel operators that they cannot act with impunity in African waters. The Conference of African Ministers of Fisheries and Aquaculture (CAMFA) in 2010 recommended ‘that monitoring, control and surveillance systems and regional cooperation should be strengthened and that urgent actions at national and regional levels are required to deter and eradicate IUU fishing’ – as a result countries, such as Liberia, took national action while the countries of the Indian Ocean and their partners responded by forming FISH-i Africa.

In order to facilitate further continental cooperation, future efforts should focus on:

STOP ILLEGAL FISHING CASE STUDIES aim to define best practice by analysing practical examples of different approaches in the fight against IUU fishing. They also demonstrate the magnitude of activities and partnerships underway to stop illegal fishing and provide the basis for policy advice.